Named a semi-finalist for Best Chef South by the James Beard Foundation in 2011 for his achievements in Santa Rosa Beach, Florida, at Fish Out of Water, Philip Krajeck left the beach resort to open his own place in Nashville. Krajeck founded Rolf and Daughters in late 2012 within the Boiler Building of the old Werthan Bag Company factory in the Germantown neighborhood of The Music City.

The thick brick walls, industrial windows, and rough-cut, sound-dampening timbers on the ceiling in the dining room surround us in an intimate space. In the center of the room, long communal tables encourage conversation with fellow diners. Two- and four-top tables line the wall underneath the windows, which reach to the ceiling. When seated, our server brought us a menu for cocktails, wines and beer, and a deceptively simple dinner menu — there were no headings — listing small and entree-sized dishes and pastas. The wine list, featuring producers from Western and Eastern Europe, includes sparkling, white, rosé, red and orange wines (wines made with white grapes in which the juice remains in contact with the skins and seeds for a period of time).

The dinner menu began with sourdough bread served with a seaweed butter which friends in Memphis insisted we try. When our server returned, we also ordered the Fall Misticanza and Beef Tartare to kick off our meal. Our second courses included garganelli verde with a pork ragout and chicken roasted with preserved lemon and whole garlic. Our knowledgeable server confirmed our inclination toward a bottle of Greco produced by Tenuta Iuzzolini in Ciro, Italy, to pair with our order.

The seaweed butter with sourdough bread showcased Krajeck’s penchant for bold ingredients providing subtle, comforting flavor. I expected a bitter taste in the butter like that found in Nori seaweed that envelopes sushi, but discovered savory and herbal flavors. Rolf and Daughters used to bake their own bread,  but now rely on the local Gnarwhal Bakery for its sourdough: a moist, airy and spongy bread perfect for sopping up pasta and meat sauces. ⭐️⭐️⭐️⭐️

The mixed greens and thinly sliced radish of the misticanza came tossed in a light oil dressing (grapeseed perhaps) with hints of horseradish and creme fraiche (⭐️⭐️⭐️1/2). We enjoyed this refreshing salad with the dry aged beef tartare, crispy fried minced turnip and shredded radish in lettuce wraps (⭐️⭐️⭐️⭐️). Both paired perfectly with the Greco.

Our server informed us that the dishes in our second course never left the seasonally changing menu after they first appeared. We learned why.  Bon Appétit named Rolf and Daughters #3 in its 2013 Top Ten New Restaurants in America with the declaration that Philip Krajeck was “put on earth to make pasta.” When eating the tube-shaped garganelli verde with tangy heritage pork ragout and SarVecchio cheese (a Wisconsin Parmesan), we shoveled the pasta into our mouths without stopping to reach the bottom of the bowl. ⭐️⭐️⭐️⭐️⭐️

Roast chicken pervades American cuisine to the point of obscurity. Our server brought a roasted half chicken with crispy skin covered in buttery whole garlic and preserved lemon sauce that celebrated a symphony of simple rich flavors. ⭐️⭐️⭐️⭐️⭐️ 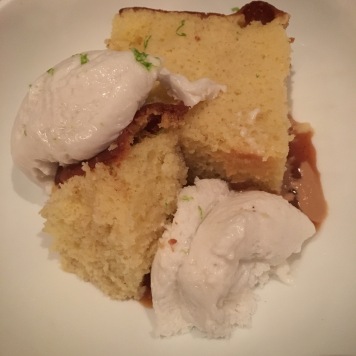 For dessert, we enjoyed a chocolate cake with hazelnut butter, a scoop of a delicious sunchoke ice cream — more savory than sweet — and dollops of brown sugar meringue (⭐️⭐️⭐️⭐️).  I love chocolate, but I favored the tres leches cake with coconut, cashew cream, and dulce de leche (⭐️⭐️⭐️⭐️) –- an amazing expression of the Latin American favorite.

The only notable stumble in Rolf and Daughters rise to fame and fortune involves a federal lawsuit filed by former line cook Adam Ortega in 2014. Ortega alleged that R&D required him and other kitchen staff to begin unpaid prep work at least 2 hours before clocking in for their shifts. The publicist and media contact for R&D did not respond to my inquiry on the status of the wage theft lawsuit before publishing this post, but a Nashville reporter who covered the initial filing informed that the parties settled out of court in January of 2016. Learning about unfair and illegal labor practices and the settlement after a stellar dining experience makes me hope that Krajeck and R&D embraced a change in policy in accord with the law. In addition to a tasty meal, I seek satisfaction that my money compensates a fair and living wage for restaurant employees.