After eating too much meat earlier in the week, I craved a light dinner with vegetables. When thumbing through my Instagram, I stumbled across a post which included an entrée at City House in Nashville made with white beans, broccoli and cornbread that took hold of my imagination.

This “Shepherd’s Pie” recipe contains no meat and reinvents the City House dish I fondly remember from last Autumn with nearly the same ingredients. I recommend a sturdy 12″ cast iron skillet for best results. Keep a close eye on the amount of stock added and reduced with the beans and broccoli. If too much stock remains in the skillet, the stock will “plume” upward through the polenta while cooking and create a soggy crust. When broiled, the butter and kosher salt create a crisp crust on the polenta. For a vegan pie, brush or spray olive or grapeseed oil instead of butter over the polenta in one of the last steps before broiling.

A @cityhousenashville dish I tried last Autumn inspired last night's creation now on the blog: #Cannellini and #Broccoli #Pie with #Polenta. Many thanks to my at-home test subject, @plinx, for his high rating.

Paul initially greeted my proposed creation for dinner with a raised eyebrow but loved the final result as much as I did. He chose a 2014 Alphonse Mellot Les Romains Sancerre with lemony, crisp minerality to pair with this savory dish, but an un-oaked Chardonnay would also complement the flavors here.

This re-imagined, all-vegetable Shepherd’s Pie is simple, inexpensive and tasty. If you try it, please share the results of your version.

Cannellini and Broccoli Pie with Polenta 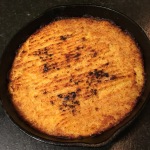 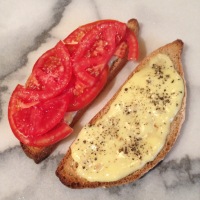