On Bastille Day and the eve of France’s World Cup victory, we celebrated French cuisine at our dining room table. Paul and I hosted a group of friends on Saturday night for what we have come to call the Wine Snob Dinner sold to the highest bidder at the annual OUTbid auction benefitting OUTMemphis.

If the title of the dinner sounds pretentious and ostentatious, well, that’s the intent. Paul and I enjoy the pursuit of excess for those willing to generously support the lesbian, gay, bisexual, transgender, and queer folks that live in Memphis and the surrounding area. Part of being gay means bringing a little EXTRA to our endeavors. We hope we delivered!

To set the mood for our Bastille Day dinner, we decorated our home with bleu–blanc–rouge flags and relied on Elizabeth David’s French Provincial Cooking for recipe inspiration. Paul chose nearly all bottles of wine from France to pair with each course to accentuate the theme.

To greet our guests, we started with an amuse bouche of Radis avec Brie et Toast and flutes of 2008 Le Brun de Neuville Champagne. Triple cream Brie, crisp slices of fresh radish, kosher salt, and drops of honey on a toasted round of baguette whetted our appetites for the courses to come.

I proudly paraded a dazzling Ratatouille Tarte around the table before slicing the puff pastry adorned with basil, tomato and red pepper sauce and overlapping rounds of Asian eggplant, Roma tomato, zucchini, and yellow squash. In the weeks prior to our dinner, I experimented with several versions of ratatouille and tomato tarts and galettes to be sure we presented a tasty pastry showcasing summer vegetables. I struggled to bake a crust without a soggy bottom that would invoke a side eye from the likes of Mary Berry on the Great British Bake Off. Pre-baking a puff pastry crust on a preheated baking stone for 10 minutes with the pastry weighted down by dry beans proved the best strategy. A rosé – a bottle of 2017 Chateau de Segries Tavel, dark pink with hints of watermelon – brought the French medley of summer vegetables in the tart alive in our mouths. 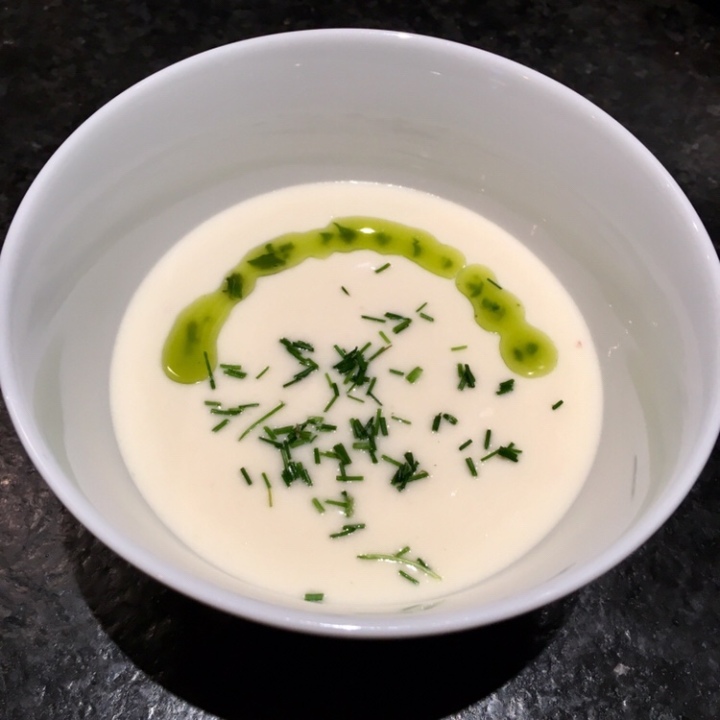 I followed Elizabeth David’s instructions to the letter for the Crème Vichyssoise Glacée for this lusciously rich, chilled soup of leeks, potatoes, chicken broth and cream with a few exceptions. As written, the recipe results in a really dense consistency. To thin the soup, I added about a cup of chilled vegetable broth. Paul made a basil-infused olive oil and chopped some chives to garnish the soup. David tells the origin of this recipe in her soup chapter:

As I have already observed, it is rare to come across iced soups of the vegetable purée variety in France, and crème vichyssoise is, as is well known, an American soup. But it was evolved by a Frenchman, Louis Diat, for forty-one years chef des cuisines at the Ritz-Carlton in New York. Based on the ancient formula for potage bonne femme, the leek and potato soup known to every French housewife, the iced vichyssoise was served for the first time by Louis Diat at the Ritz-Carlton in the summer of 1917, and has since become famous all over the United States.

Mére Fillioux of Lyon made La Volaille Demi-Deuil famous in the early 20th C. in the restaurant which retains her name. The chicken in half mourning describes the veil-like appearance of the black truffles tucked underneath the skin of the chicken. We sourced summer black truffles from Italy through a distributor in New York City for this simple dish of poultry poached in beef stock with carrots and leeks. When I made this dish a few years ago, I used black truffles preserved in a jar I found at my local Fresh Market with mediocre results. A special order of fresh truffles assures a proper homage to Mére Fillioux’s contribution to French cuisine. 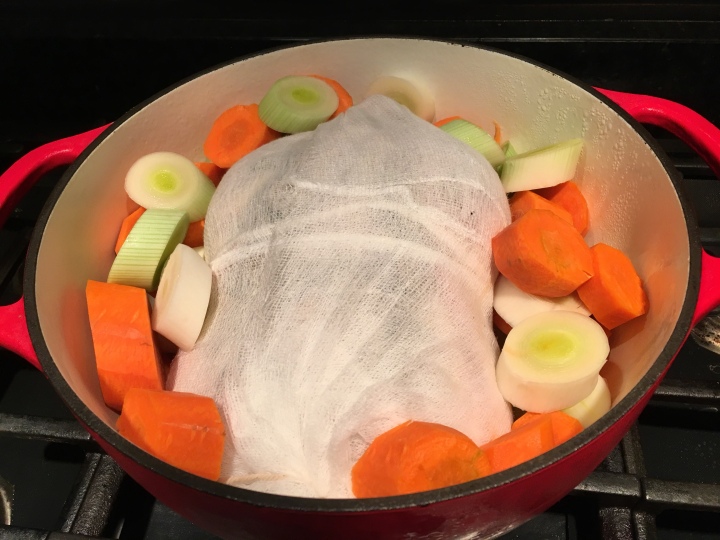 Paul carved the chicken table-side like Mére Fillioux in her restaurant a century ago and served each dish with pinches of coarse kosher salt. I cannot wait to make this dish again. Paul poured glasses of a full-bodied 2013 Olivier Leflaive Puligny-Montrachet to enjoy. 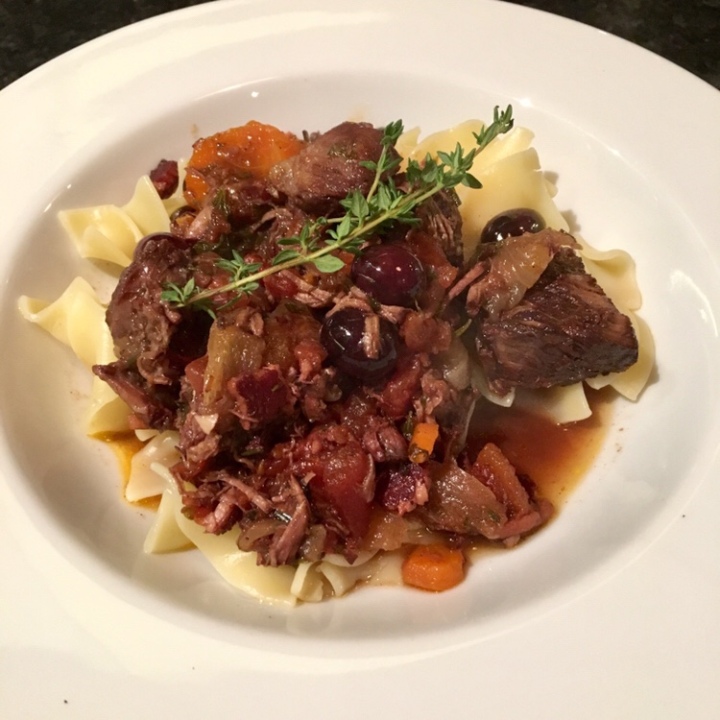 Paul prepared Boeuf a la Gardiane, a dish from western Provence and the Camargue which Elizabeth David says demonstrates “the stewing of a tough piece of meat in red wine without the addition of any stock or thickening for the sauce.” The orange peel, crushed clove, and black olives imparted decadent fragrance and warmth to the red wine stew. Traditionally, one would serve this dish with a wine from its place of origin – the Rhône Valley. Paul, however, chose a 2009 Chateau Leoville-Barton from Bordeaux with hints of blackberry and licorice.

For dessert, Paul served us an Assortiment de Fromages for our final course (Gouda, Humboldt Fog with a streak of harissa, Saint André, Roquefort, and Zamorano) with a 2015 Gunderloch Jean-Baptiste Riesling Kabinett.

We deeply appreciate Sue, Frank, Nikki and James for supporting the work of OUTMemphis through a mutual love of good food and wine. We spent months developing a menu that we enjoyed preparing and sharing.