When I scheduled a visit with my brother and nephew, I told my brother that I planned to dine at a Michelin rated restaurant in Hong Kong. After reviewing the list together, we agreed to narrow the choices to one star restaurants for two reasons. First, a long dinner at a higher rated restaurant might push my 12-year-old nephew over the edge (sitting still is a challenge). Second, Trey believed that Michelin soiled its brand in Hong Kong:

I didn’t come to Hong Kong to sample European or Japanese food, so choosing a one star Chinese restaurant made sense. We chose Peking Garden, one of Maxim’s Chinese Cuisine’s longest-standing properties among its many provincial themed restaurants that serves authentic Peking cuisine. All reviewers of this restaurant heap praise on their classic Peking Duck.

My good fortune in the Chinese New Year would ensure the best dinner company with the Wang family into which my brother Trey shall soon marry. I already owed Trey’s fiancé Vivian, her daughter Natalia, and her parents many thanks for sharing their knowledge and skills of northern Chinese cookery. Having them along for the ride ensured I would dine with an informed and critical audience.

We chose a prix fixe menu for the table along with another dish to share a la carte. Our first course included a chilled salad called “Three kinds of cold cuts” of chopped Chinese cucumber, garlic chives, spicy red pepper and a fresh fleshly tofu which Vivian compared to chicken. We also enjoyed another cool salad of sea blubber in scallion oil (slightly sweet al dente cured jellyfish), a smoked and chilled vegetable roll with delicious and crunchy carrot, and fried spare ribs with black vinegar sauce.

The next dish presented fresh and perfectly sautéed prawns and scallops in a sweet and spicy rice wine and chili sauce.

The next course offered a delicate wonton soup and fish maw in casserole — the kind of comforting soup I would hope a Chinese mother or grandmother would make for me when under the weather.

A waiter presented a whole Barbecued Peking Duck to the table before, retreated to a carving station within sight, and then returned with plates of thinly sliced duck and crispy sweet skin, spring onion, cucumber, sweet bean sauce, and pancakes for rolling. Our waiter suggested pairing a Lochor Estate Pinot Noir from New Zealand with the duck.

Beijing style restaurants in larger U.S. cities might serve Peking Duck this good, but Peking Garden set a new benchmark standard for me.

Vivian’s father recalled a variation in serving this dish in Beijing restaurants where the excess meat not paired with crispy skin is used in a soup presented along with the platters and pancakes. He’d hoped for the same here, but I was glad we didn’t have that extra soup to compete with a dish we ordered outside our courses: a spicy ground pork served with airy-crisp sesame seed buns for stuffing.

For the finale, we ended with a dessert cup of warm, sweetened almond milk hiding gently cooked egg white and glutinous rice balls containing flavor bombs of sweet emulsified dark sesame seeds beneath the surface. Before dessert arrived, I felt too full to go further, but I found my second wind in reaching the bottom depths of this cup.

In addition to the meal, we enjoyed a dramatic presentation of lamian (pulled noodle) on a rolling table performed in the large dining room around 8:30 PM which rivaled the skills of Vivian’s mother who taught us the basics of pulled noodles a few days prior to our dinner. In any contest, I would place bets on Vivian’s mother against the restaurant chef, but the presentation proved fun for all — especially young spellbound children with their families. The above theatrics, excellent Beijing cuisine, and attentive service make Peking Garden worth a visit. 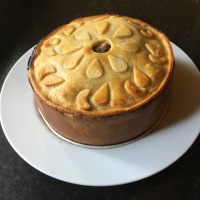